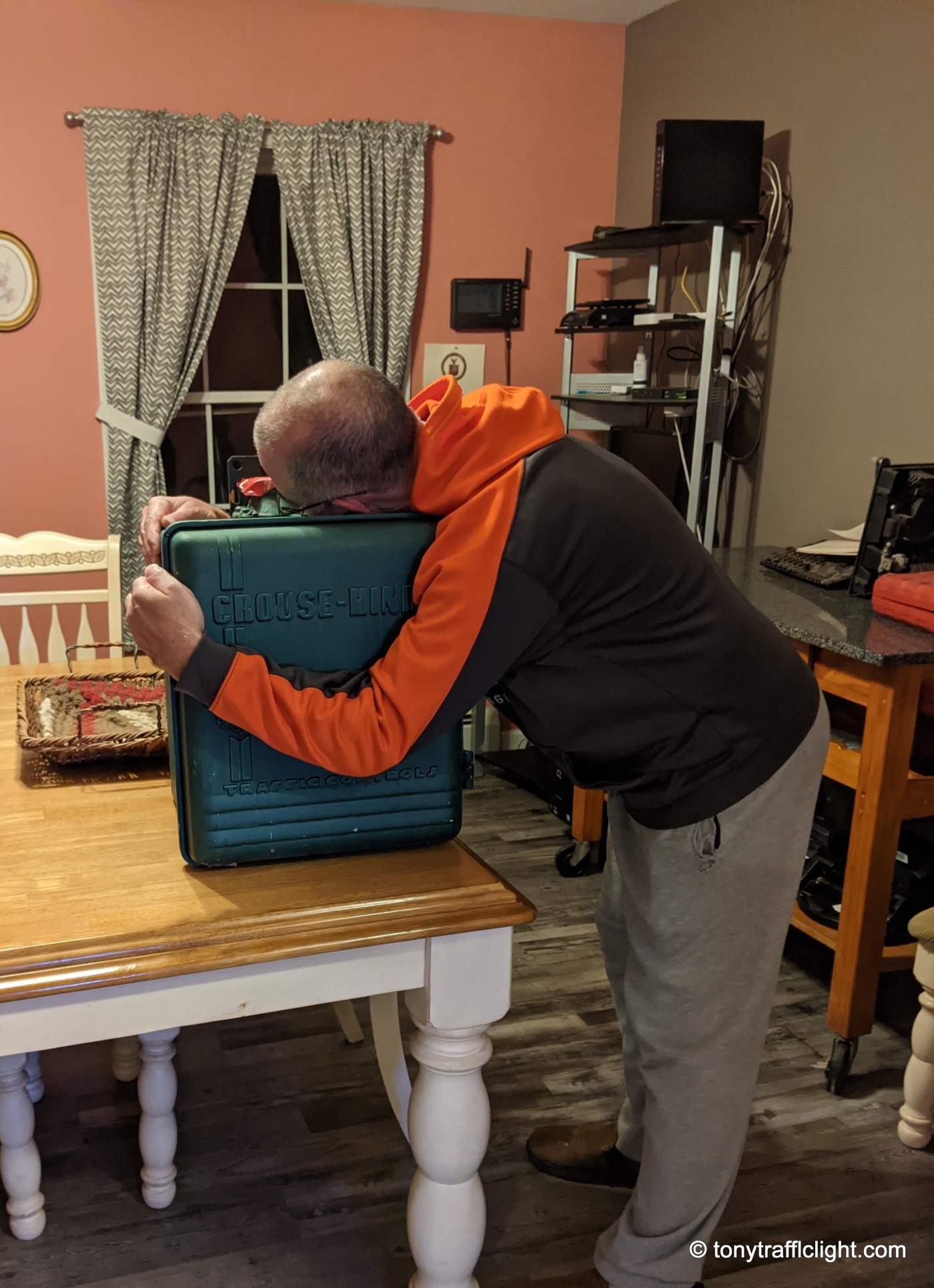 I picked up another Crouse Hinds PCN-100 Traffic Signal Controller a month or so back. Here it is having it’s first hug in a long time.

This is another from Utica New York. My favorite place to get them from as you probably already know. There were upwards of 50 of these on the streets of Utica. I think as of 2020 there are 2 or 3 left now. Almost all were replaced in 2016 & 2017 in the great “modernization” of Utica’s old mechanical controllers. I’m pretty sure this one came down in 2016.

This one came from the corner of Broadway and Lafayette Street in Utica, NY. Here’s the markings on the inside of the box with the street names.

It’s in overall excellent condition. Somewhere along the way the original had it’s dial and mechanism replaced with a spare. These things ran 24/7/365 days a year so sooner or later something might fail. With all the old controllers the city had and when they started eliminating intersections in the early 2000’s, there was bound to be spare parts like this.

Thankfully, when the city took this down and replaced it, they must have stored it someplace for a while. During a signal pickup in 2018, I tripped over a stash of these at a contractors laying in some tall grass. There were a lot of them there and as soon as I saw them, I knew where there were from. Remember now, I say I’ve got a trafficgraphic memory. I saw some of the controllers, if they were painted, had stickers on them or even graffiti, I could tell you exactly here they were from. I know, thats kinda weird.

Here’s a photo of the corner of Broadway and Lafayette Streets in Utica in the early 1950’s with the controller proudly serving this corner already.

Here is a Google Street view photo from 2011 showing the same corner again along with the controller on the pole.

Here’s a Google Street View image from 2016 showing the same corner along with the “replacement” controller on the pole now.

It’s always pretty cool to have something i’ve seen 100’s of times out on the street and be able to save it. These controllers ran happily for so many ears without any issues until the intersection had it’s signal taken down or it broke or was replaced.

I hooked it up to my GE 4 Way Signal and here’s a video of it running the light.

Thats all for now. I wish 2020 was over because it’s hasn’t been a good signal collecting year with the pandemic. Here’s to a better 2021!!!

This was the original look in my previous post.
Cruising around Utica and Rome NY today.
Today's work looks better at night. #trafficsignal #trafficlights #signals #romeny #uticany #centralnewyork #mccaintrafficsupply
Early morning project before it got to hot and the backyard shade disappeared. Just a couple of ped heads joining the rest of the backyard stuff.
An unexpected addition this week. Tipped off to this on FB Marketplace. Drove an hour today to rescue it. First 3 way cluster for me. Lots of smileys, cloth wiring, cool hardware, missing the top and hanger unfortunately. Still a great light.
Coming soon..........